Barbara Spinelli, Vice-President of the Committee Constitutional Affairs of the European Parliament, in a letter sent to the MEP (21 September) affirmed that the first declaration of Jyrki Katainen disregard the demands made by Mr. Juncker to the designated Commissioners. In the appointment letter sent to Mr. Katainen on 10 September Mr. Juncker asked to work for delivery a 300 billion investment plan in the first 3 months. Mrs. Spinelli underlines that "The real solution might be the one put forward by the European citizens’ initiative “New Deal 4 Europe”, with EIB interventions and two European taxes: a financial transactions tax and a carbon tax. This may result in an increase of the EU’s own resources, which was rejected by the European Council in spring 2013."

Read the integral speech of Mr Katainen and the letter of Mrs. Spinelli 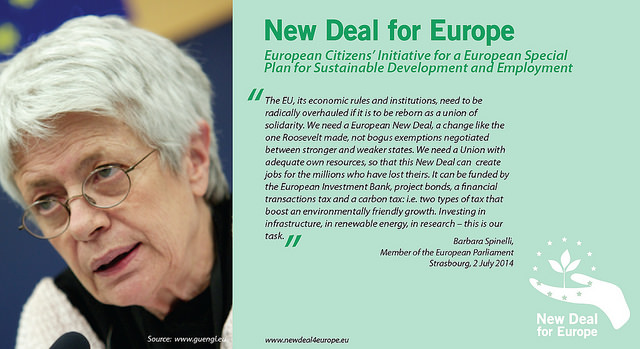 The designation of Jyrki Kaitanen as Vice-President of the Commission in charge for jobs, growth, investment and competitiveness, as well as his first remarks at the European Parliament shortly after his nomination, are disquieting. After seven years of a dire crisis only worsened by fierce austerity measures, the task of the new Vice-President should be to get immediately to work so as to guarantee the investments needed for European economic recovery and for the return to full employment, thus achieving a crucial objective of the Treaty.

In his mission letters, President Juncker urged Mr Jyrki Katainen and the other commissioners-designate to take action within the first hundred days of the new Commission.

Given Mr Juncker’s statement during the plenary session in Strasbourg, on July 15, it seemed to many members of the European Parliament that this was the conclusion the new President had finally come to, since not only did he criticize the troika’s policies, but he also announced the plan that now bears his name: a 300 billion euro investment plan for the next three years.

Katainen’s remarks move in an entirely different direction. Rather than talking about the investment plan, he repeated his austerity recipes, implying that first each State shall put its house in order and only then investment plans– if necessary – will come. This is not his mission, if it is true that he will have to deal with jobs, growth, and investment. Nor is it up to him to ask for “structural reforms” that drastically restrict workers’ rights and aim at weakening the essential role played by trade unions, as is the case in Italy and in several other countries of the Union.

Juncker’s plan is certainly not enough, and it is far from clear how it will be funded: whether it will be just a matter of slightly increasing the resources made available by the European Investment Bank and reorganizing the current European funds. The real solution might be the one put forward by the European citizens’ initiative “New Deal 4-Europe”, with EIB interventions and two European taxes: a financial transactions tax and a carbon tax. This may result in an increase of the EU’s own resources, which was rejected by the European Council in spring 2013 (at that time Juncker was a member of the European Council and of the Eurogroup).

Suggesting that national austerity comes first and discussions about cooperation and common investment will follow, is part of an ordoliberal ideology with unmistakable neo-nationalist features, contrary to the idea of a politically united Europe, built on solidarity.

By doing this, Mr Katainen breaks the three fundamental criteria that every European Commissioner must meet: knowledge (of the EU objectives as stated in Article 3.3 of the EU Treaty, which promotes a social market economy, aiming at full employment and social progress), independence (from the austerity measures some States want to impose), and European commitment (to the principles of solidarity and loyal cooperation).

These are the reasons why the members of the European Parliament should reject the designation of Jyrki Katainen, if they want to be credible in the eyes of the citizens they represent.

Ø Jyrki Katainen, Vice-President of the Commission. - Mr President, honourable Members, thank you for giving me the opportunity today to present to you the position of the Commission on the preparation of the euro area summit to take place on 24 October 2014 on the occasion of the European Council.

The preparations for the summit are still at an early stage. As such, I very much look forward to hearing your views here today on how we can work together to deliver sustainable growth, create jobs and secure the welfare of our citizens. We are currently facing formidable challenges that only serve to underline that we have to do whatever it takes to deliver robust, sustainable growth and jobs in Europe.

The Commission sees three main priorities for economic policy this autumn. At the informal Ecofin Council last weekend in Milan, we had a very fruitful discussion with finance ministers on a number of key issues. Going forward will, however, require a joint commitment from the Commission, the MemberStates, you in Parliament and other partners regarding our shared objectives.

The first priority this autumn is supporting investment. Europe has a lot to offer in terms of innovation, a skilled labour force and entrepreneurship. In order for all of this to translate into new start-ups around Europe, we need to promote investments from both public and private sources and at both national and European level. We are working on a comprehensive plan that addresses both sides of the coin. This must be a joint effort.

At national level, countries with large current account surpluses should commit to investing more. In addition, all countries should prioritise investment in research and development and key infrastructures within their public spending mix.

At European level, European resources, such as the European budget and the EIB, should be used in particular to leverage private investment. We need a stable and robust banking sector and well-functioning capital markets to provide accessible credit to the real economy.

The second priority is stepping up reforms that unlock growth potential. Without effectively-implemented reforms, we will not have sustainable growth and job creation. It is not about choosing between supply and demand-side measures: both are needed and are complementary. Reforms are also needed to secure the sustainability of our welfare societies and ability to protect the vulnerable. No country is immune from the need to reform, although some have more pressing needs. We should use the existing economic governance framework more effectively to support the adoption of the implementation of structural reforms. Our fiscal rules do not prevent countries from reforming – far from it. There are many examples of countries that have adopted important reforms in parallel with major fiscal adjustment. Nonetheless, there is scope to use our existing economic governance framework more effectively to support countries in their reform efforts.

Thirdly, we need to continue ensuring sustainable fiscal policies for the sake of confidence and future generations. Interest rates will surely not stay at record lows forever. Once they rise, public debt will become more costly, again crowding out more valuable public spending and undermining the market confidence we have all worked so hard to regain. The more vulnerable countries would unfortunately be the hardest hit by any new financial market instability.

Wise choices are therefore required. The pace of fiscal consolidation has slowed significantly since the peak of the sovereign debt crisis. Now it is essential to improve the quality of public spending. When money is tight, there is little choice but to make savings, but there is always a choice as to how to make those savings. Reducing expenditure rather than raising taxes and cutting inefficient current expenditure rather than future-oriented investments can ensure that consolidation is growth-friendly, fair and supportive of growth creation.

A more efficient and citizen-oriented public administration can especially benefit those in need of social support but also promote job creation by enabling a better investment climate. As stated by the Euro Group last weekend, more efforts are needed to reduce the tax burden on labour. At the same time, we need to ask ourselves what is holding back private investment in Europe. We need to ensure that the business climate, our internal market and the regulatory environment are favourable to companies investing in the future: innovating, developing new markets and creating jobs.

This ties in with my report on reforms. There is plenty of growth potential in Europe that is today held back by rigidities and vested interests. In some Member States, starting a business means weeks of cumbersome bureaucratic hurdles. Overly-complex tax systems in some Member States have contributed to a sizeable grey economy. Reforms are needed to deal with these obstacles. This inevitably means changes that require not only thinking outside the box but also stepping out of our comfort zone.

Europe continues to face great challenges. While there is no silver bullet, I am confident that we can find new sources for growth and to enable us to work together in a spirit of mutual trust. Major joint efforts are needed to deliver sustainable economic growth. At the end of the day, we all share the same objective. Let us not lose sight of that objective.

Video of the Preparation of the Eurozone summit (debate)