Manifesto For A European Plan for Sustainable Development and Employment 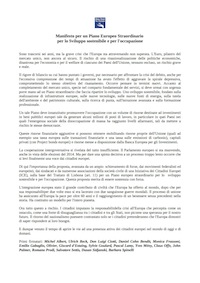 Six years have passed, but the severe crisis that Europe is experiencing is not yet overcome. The euro, a pillar of the single market, is not yet in a safe condition. The risk of economic policies being re-nationalized, a disastrous event for the economy and welfare of every country of the Union, no one excluded, is serious and real.

The emphasis of governments on budgetary rigour, albeit necessary to face the debt crisis, has aggravated the depressive spiral, due also to time compression of the achievement plan, jeopardising the healing of the financial system. It is necessary to think in new ways. In a serious and continuing recession phase, along with the completion of the single market, particularly in the essential field of services, and with the most indebted countries committed to put in place policies aimed to redress their national budgets, we must consider a special plan for relaunching development. A sustainable development, based on the realization of European infrastructures, on new technologies, on new energy sources, on the protection of the environment and cultural heritage, on cutting-edge research, on advanced education and professional training.

Such a plan must in the first place promote employment through such an amount of resources earmarked to investments in European public goods as necessary to generate a few million jobs, in particular in those countries where the social emergency of mass unemployment has reached alarming levels, up to the point of putting at risk their own democracies.

These additional financial resources can be found by providing for new Union's own resources (for example a European  tax on financial transactions and a tax on carbon emissions), private capitals (with Euro project bonds) and resources made available by the European Investment Bank.

The inter-governmental cooperation has proved to be utterly inadequate. The European Parliament is taking some action, also in view of the 2014 elections. But in order to impart a decisive thrust to a too slow process, it is necessary that a voice rises up at last from the European citizens.

Hence the importance of the proposal, put forward by a large lineup of forces, from the federalist and pro-European movements to trade-unions and to many civil society associations, of the European Citizens Initiative (ECI), as provided by the Lisbon Treaty (Art. 11), For a Special European Plan for Sustainable Development and Employment. This proposal deserves to be strongly supported.

The European integration has been the great contribution to civilization that Europe has offered to the world, after it was torn apart twice for its fault in two bloody World Wars. Its unification process has ensured peace in Europe for more than 60 years now, and a wealth without precedents in history. It has also been a model for the entire planet.

Now all this is at risk. Europe is perceived by its citizens as the primary source of the difficulties created by the crisis, and more specifically as a source of inequality between citizens and countries, no longer as a hope for our future. The comeback of nationalism can be tackled only if the European citizens will demand that Europe proves to be capable of answering to their needs. The time has come to open the road to an active presence of the European citizens in today's and tomorrow's world.